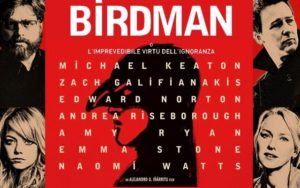 If you have seen some innarritu films than you probably know by now that most of those films use long cut free sequences. His films are different, hilarious and beautiful with his trademark long sequence shots. This long shots method was also used successfully by Hitchcock’s in late 40s. But long shots are not the only interesting thing about this movie. It is a movie of showmanship, a movie about the ups and downs of an actor and the director showed it in a brilliant way.

Let’s talk about the plot of the movie, Riggan is a former smashed hit actor of the birdman franchise. But his franchise decided to discontinue the third and fourth installment. Now Riggan wanted to prove something and he decided to work in Broadway. A play adapted from a Raymond Carver short story. But the show wasn’t successful in the opening night and the disastrous journey of the show continued. But eventually the play got the touch of magic of birdman.

The movie is full of dark comedies with some magical realisms and you will definitely feel a vibe of the formerly Oscar winning Black Swan. The style of the film is very appealing for the audience. The filmmaking is outstanding to say the least and Michael Keaton gave a bold performance.

A film in which nothing and no character stays still and not a moment of boredom. The acting is brilliant from all cast members and Michael Keaton is really striving to the best he can. Each and every character here registers strongly throughout the movie. Edward Norton’s Mike is sleazy in the extreme but he had a Method-style integrity about him.

Inarritu tried a change of direction with this film and he did it brilliantly. The complexity of his characters was pictured effectively. The balance between despair and humor in this movie was also brilliant. It is hard to explain why someone will instantly love this movie. But once you see, it will be easier for you to describe the heart touching aspects of this film.